“Take me to the festival / I’m only here to get sensual / Liberte, Egalite, Fraternite / Let it ring!!” (from “Freedom”)

Nadel Paris is a scintillating new sensation in the universe of Electronic Dance Music (EDM). With messages of love, liberation and steamy sexy drug-free fun, she is enchanting the most discerning nightclubs and full-blown Raves around the globe with a rainbow of hot, whip-smart vibrations to get you “dancin’ UP!”

“The album is all about love,” Nadel shares, “with some thought behind it…but not too philosophical. You can only get so deep within a 3-minute song. Real big for me is the fact we are all connected and belong to the same source…despite all of the haters in power positions that are not in tune to the source.”

Nadel primarily collaborates with producer DJ M who she has known in her native France since they were 12 (note: she is the godmother of his son). They both came to America around the same time and wound up working together in southern California, initially writing songs for other up-and-comers to perform as writer/producer/mentors. That all changed when DJ M grew more and more enamored with the demos Nadel was singing on.

“At first when I was writing lyrics to M’s tracks, we were auditioning many kids but none of them were quite cutting it,” she states. “Some looked nice but couldn’t sing, some sent in nice pictures then would show up 20 pounds heavier in person. So many issues… One day I arrived at the studio and M essentially said, ‘O.K. Nadel, we’re staging an intervention! You need to be the one singing on these records!’ He swore he could detect little to no accent in my vocal delivery which was perfect for what the songs required. Plus, who better to deliver the kind of lyrics that I write? Understanding my own vocal strengths and limitations, I can bring something to music that people relate to.”

Nadel has an IQ over 150 and is a graduate of the inspirational program of motivational speaker Tony Robbins (author of “Unleashing the Power Within”). It’s quite a challenge for her to hold her tongue when it comes to the toxic political climate in America and beyond. The compassion that fills her soul compels her to work constantly for the betterment of others. As a teacher of the arts, she inspires singers to belt as much from their hearts and spirits as their lung and diaphragms. And in her own songs, she strikes a slaying balance between conscience and intelligence with all things sensuous (she is openly bisexual).

“There is a shock factor to many of my songs,” Nadel states. “I like presenting a stronger image of women. Today, we run the show in relationships as men have become the more ‘sensitive’ ones - an underlying thread of Oooh La La La La.”

In her song “London Royale,” she rales against the materialism of the filthy rich.

Nadel believes there are higher things that can be done with wealth. On her way to attaining her own, she plans to start charities that provide vital assistance to people – particularly children and animal rights. She muses, “I’m that woman that wants to go to so-called ‘shithole’ countries and help raise their standard of life.”

Nadel Paris was born in France to a mother who was a Christian Dior model and a father who was a psychotherapist both from whom she absorbed their outstanding qualities of beauty, compassion and higher learning. However, it was soul music – from Chicago Blues and Jazz to Funk and Disco - that ruled her young life. Every day after school, Nadel would run home to immerse herself in the sights and sounds of artists ranging from Aretha Franklin, Janis Joplin and Tina Turner to Madonna – even Spanish music - emulating their every move. At age 12, she had a contract with EMI France which sadly steered the pretty young talent to a Pop repertoire. Later as an adult, she fell prey to a crook claiming to promote her music abroad. Through it all, she has retained her upbeat outlooks on career and life.

“Sometimes I feel I was born in the wrong era,” Nadel concludes. “I love singers of the `60s with blazing bands. But music has changed and I love dance music. Today with great songs, you can remix them to reach wider audiences. I love how a song like ‘Oooh La La La La’ can start out Pop and evolve into something more electrifyingly EDM. My dream is to blend the best of both fantastic eras.” 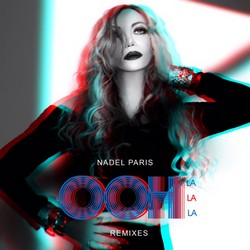